How to use Bootstrap with Jekyll

Some years ago, I started messing with Jekyll for fun. I liked the idea that you can have your blog, with not a lot of coding, and especially that you can host it for free on GitHub. Something like Wordpress was overkill for what I wanted to do and Medium (which was not an annoying platform back in 2014) was slick and simple, but not customizable. A part of me wanted to create something.

When you first build a Jekyll site, it comes by default with minima. It may fit a lot of needs but I don’t really like this theme. No offense to the creators, but it’s not my taste. I started to use Bootstrap 3 in 2014 and I enjoyed how you can use the prebuilt components and layout, thus, why not use it with Jekyll.

We could also use themes already packaged as RubyGems, even some with the Bootstrap framework already included but we would have the same problems; we can’t easily change the features of the theme, we’ll see why later.

Anyway, this should be simple to do, I mean, it’s just some CSS, amarite?!

If you follow the official Documentation on how to install Jekyll, once the Ruby packages are installed, you create your site with the command jekyll new my_blog. Inside the newly created directory, we’ll find the following files. 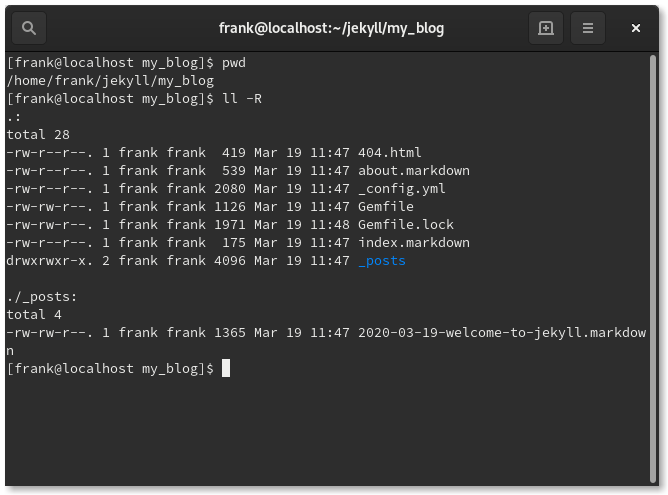 Wonder where the theme files are? Because besides ./_posts, there are no other directories. Themes are not there because they are managed by some stupid RubyGems. I say stupid because while it’s a great concept for more complex applications, a Jekyll website should remain the simplest form of a website there is and include, right off the bat, the CSS and JavaScript associated with the site. But hey, I’m not a Ruby developer, so my opinion is irrelevant!

At least, we can go get these files elsewhere on our machine. Let’s find where the theme is by running the command bundle info --path minima inside our my_blog directory. The output should look something like this. 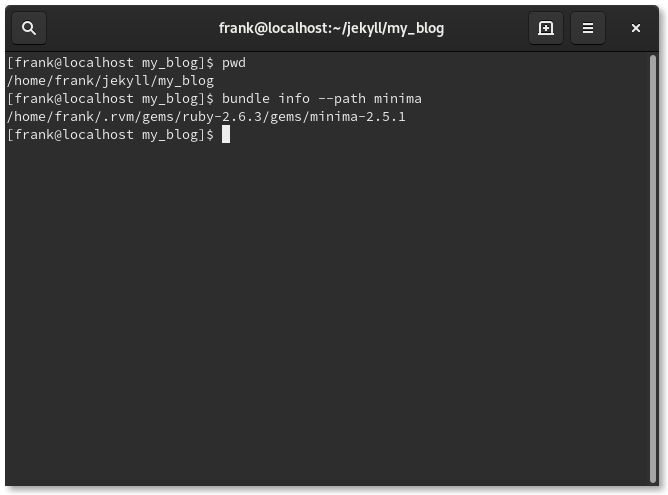 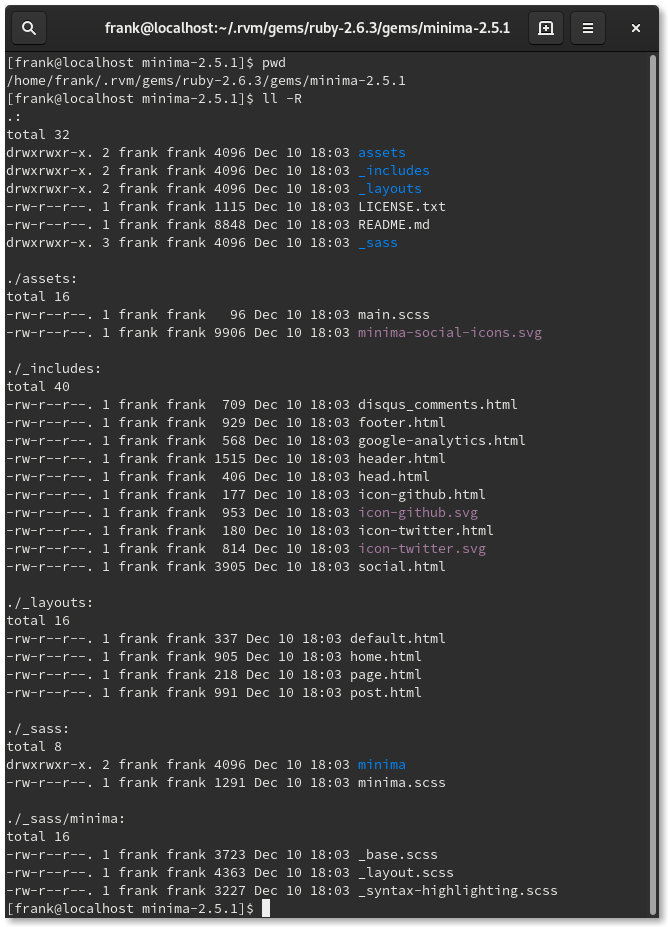 There is way more stuff that there used to be back in 2015. It seems like a lot for something that aims at being “simple”, as stated in the title tag.

Anyway, I don’t care about minima and its features, so let’s start from scratch following Jekyll’s official step by step tutorial. It’s easy to follow and quick to finish. Once you’re done, you’ll end up with a project structure like the one below. It includes everything in a single directory, no RubyGems that are elsewhere on your machine or someone else machine (aka, the cloud). 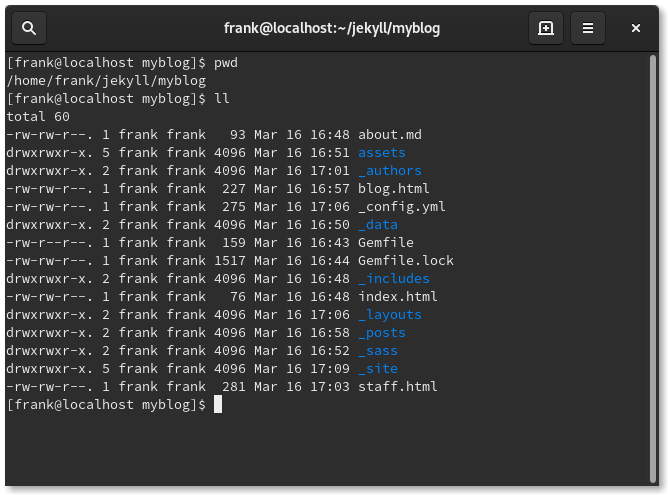 Adding Bootstrap to the mix

As I understand per the tutorial, in not technical terms:

Understanding that, we can modify our newly created site to use Bootstrap. Let’s download Bootstrap 4. Once we’ve unzip the file, we end up with all those files. 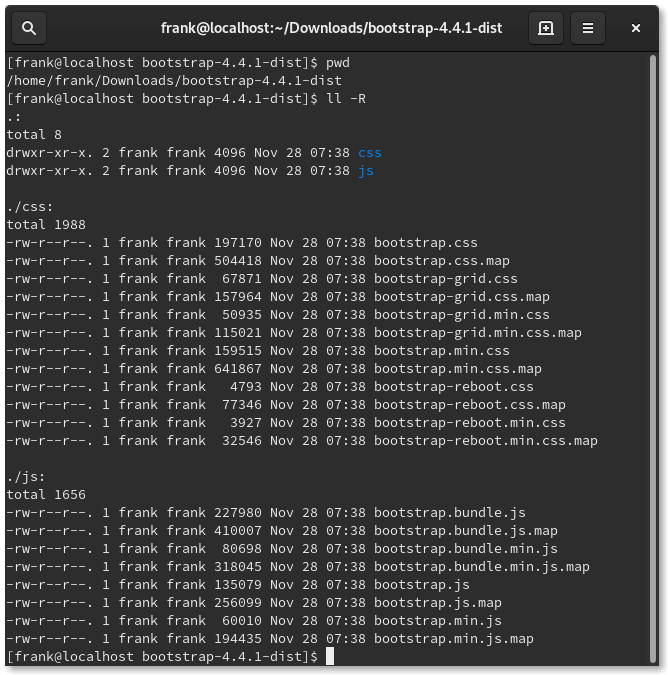 You only really need boostrap.css and we need to change the .css extension to .scss. If we follow the same procedure:

With this done, we can test our changes to make sure it works.

If the server is running (jekyll serve), Jekyll will regenerate our site (the ./_site directory) as we make changes. We would need to restart it if we made changes to the _config.yml file but it’s not the case here. 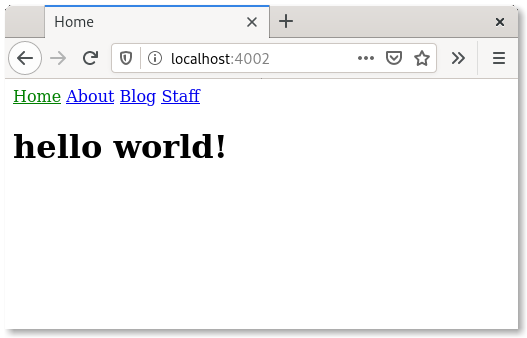 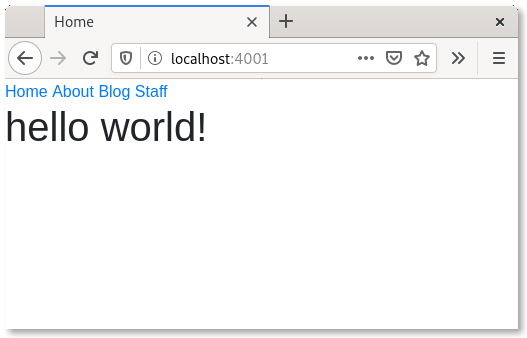 We can also add some Boostrap components by inserting the HTML code directly into Markdown files, into a post for example. Below, we have alerts and buttons in a blog post page. 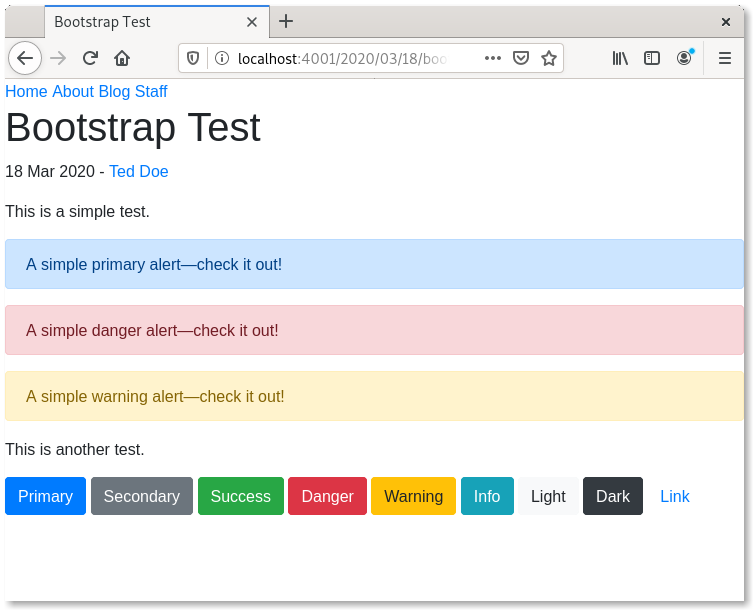 Here we are, that seems to work fine!

The posts we write can be in Markdown (.md) or in HTML. It’s more natural to use Markdown but it’s a bit limited in terms of styling. I say limiting because if we take a look at this excellent Markdown cheatsheet, there is a lot that can be done with pure Markdown. But, for example:

Finally, We don’t have to use Bootstrap, we could use any CSS framework, the procedure is the same.

I would like to try to start from the minima template, the one created when you run jekyll new my_blog, and then replace it with Bootstrap without having to start from scratch like we did. But as seen earlier, I didn’t have the patience to do so and my quick attempts have failed. Pepehands

I still have a problem using Boostrap JavaScript from a file, i.e., if it’s not from a CDN. Maybe it’s because I need to also download jQuery? Since I don’t necessary need the Boostrap components using JavaScript, I may not fix this.